A Tectonics Article By Angell Pearce

The Arabian plate runs roughly 2600km N-S and 3000km E-W, with an approximate plate thickness of 40km (Johnson and Stern, 2010). The upper crust has a crystalline Precambrian basement that is Neoproterozoic in age (1000-540Ma) and is referred to as the Arabian Shield. Its lithologies include schists, amphibolites, gneiss, meta-basalts, greywackes, cherts and andesites (Wagner, 2011). Overlying the shield are Phanerozoic sediments (excluding the SW region) as well as Cenozoic flood basalts in the west (Johnson and Stern, 2010). This sedimentary/volcanic package is referred to as the Arabian Platform and it thickens towards the east. The sedimentary rocks are primarily carbonate and siliclastic deposits, with intermittent evaporates. The exposure of the Arabian Shield in the southwest (see figure 1) as well as the thickening of the Arabian Platform towards the east is generally attributed to uplift from rifting in the Red Sea and from loading in the north due to collision with Eurasia. 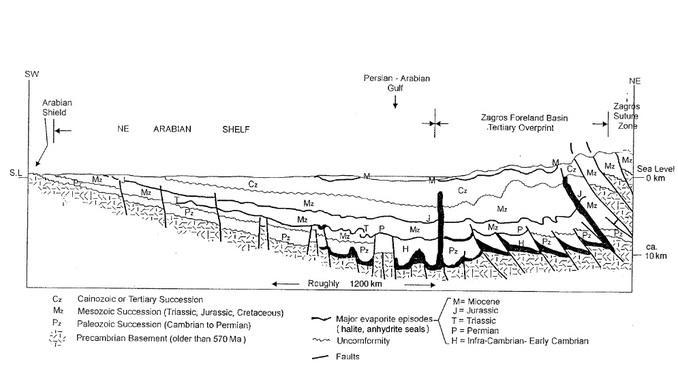 As previously mentioned, the Zagros Mountains mark the collision zone between Arabia and Eurasia, and this active convergence leads to much seismicity in the area. There are many and frequent earthquakes reaching surface wave magnitudes of 7.0 and at focal depths within the upper 20km of crust (Jackson and Talebian, 2004). The shortening rates are faster in the SE than in the NW and this is due to the counterclockwise rotation of the Arabian plate (Hessami et al. 2006). As a result, the SE experiences shortening perpendicular to the trend of the fold-and-thrust belt, and the NW collides oblique to the trend (see figure 4; Jackson and Talebian, 2004).

Talebian M and Jackson J. 2004. A reappraisal of earthquake focal mechanisms and active shortening in the zagros mountains of iran. Geophysical Journal International 156(3):506-26.